We Stand with the American People

Upload a featured Image or attachment

I read an article titled “We Stand With the Black Americans”, an Open Letter from a Yale Student to the Chinese Community. The author is a Chinese American student.Reading the article made my heart sink. This is a typical article written by someone who has been brainwashed by leftist ideology.  It also represents the greatest worry of many Chinese parents – that their children’s minds will be indoctrinated into leftist thinking and can not distinguish right from wrong.

Child, your education has not broadened your understanding of what is right and what is wrong.  In your arrogance and conceit, you believe that you must be the one in the right.

You unjustly accuse the entire Asian community, accuse your father and mother, by saying “Asian Americans have long perpetuated Anti-Black statements and stereotypes “.  As if the entire Asian community is in the wrong, and you are the only one who is right.  This holier than thou attitude makes you think you can judge like God.  No.  What it does is perpetuate prejudice against an entire race, your own race.

Child, you are arrogant and conceited.  What the education system and certain very vocal media outlets have taught you is NOT knowledge but information and misinformation.  What you have NOT learned is humility and the ability to distinguish between good and evil.  Indeed, through inexperience, you lack common sense and a broader view of the world.  Your spirit and conscience has been targeted by mass media to hate your own race in favor of another race.  This is an intentional campaign.  This is racism and bias encapsulated and perpetuated.

Child, life is not perfect as it is in Heaven and it never will be.  We struggle to do the best we can and I just want to tell you what the world is like in plain and simple words, reality is harsh.  You will not imagine or fantasize reality away. Treat all with respect and ask that you be treated with respect in return.

Child, your father and mother love you. Because of this love, we have protected you too well, shielding you from the lessons of hardship.  I fear this may be the root of your arrogance today.

Confucius once taught us:

“Better safe than sorry. Be aware of your surroundings and act cautiously. Any sensible person will not stand under a wall that’s at risk of falling. By learning about possible disasters in advance, you can save yourself from both physical and mental harm.

Similarly, if you find yourself in a possibly dangerous situation, you must leave without delay.”

Maybe you won’t understand this yet, but attaining wisdom and knowledge of good and evil is the same for the entire human race and irregardless of skin color.  If you open your ears and hearts and listen with an open mind, maybe you will understand why your parents often teach you about the problems existing for many in the African American community.  It is NOT “rampant anti-Blackness” it is the truth from the heart.

Yes, it is true that “many of us live in affluent neighborhoods, send our children to selective universities, and work comfortable, professional jobs.”  But Child, have you ever wondered how we were able to come this far and to achieve this much?

We are never born RICH, at least not in the absurd way you think.  We are first generation immigrants, having experienced different political systems in other countries.  We have been through extreme poverty and tough times. That was the reality OUR generation had to face, learned OUR life lessons from, survived years of suffering so that you would not have to suffer.  You are fortunate that you did not have to go through what we went through.  Or maybe it is unfortunate that you did not live this harsh reality and so your view toward society is distorted.

“Your worry-free and peaceful days are only possible because someone else has and is carrying the burden for you.”

Your parents may not have had a better education than you, but have you ever considered that they came to America bearing the burdens of life that rival the burdens of African Americans today. It’s just not been written about much or used as a political agenda.  They had to overcome not only a language barrier, but also cultural shock, economic struggles and prejudice. There has always been a higher bar set for Asians.  This is the myth of the model minority.  We were not given any racial preferential treatment and we endured in silence so that our children would have better.  We never blamed anyone else for our struggles in life.  We took ownership of the struggle and constantly worked to do better.

We worked hard, and are often unappreciated, to provide our children with the necessities in life.  A stable home to live in, a home in a safe neighborhood and near a good school district so our children will be safe and be able to have a good education.

Child, before you blurt out terms you have read or heard in media propaganda like “rich community”, “top college”, “comfortable professional job”, first recall your conscience, honor your parents, and take a moment to reflect.  These things are only made possible by the sacrifice and hard work of your parents in the hopes that you will one day do the same for your children.  The path has always been to move forward and up, not remain stagnant and down. This is the way of life. Competitiveness and the goals of higher achievement is a good thing, not bad; it is what will drive society into the next generation and next century.

Child, in your open letter, I don’t see you showing any gratitude to your parents. You don’t even show gratitude to America – a country that provided you with opportunities and rights that you enjoy now.

While we condemn violence to any person and undue, excessive force used by law enforcement and while we can be sympathetic to the plight of African Americans, your exaggeration of “political correctness” and progressivism, does not stem from a love of this great country or even the idea of equality but from an extreme propaganda machine infecting many in America.  You blame the Asian community and your parents for “stealing” the fruits of African American politics BUT this is not true.  Your accusations are mad and prejudiced.

Under the founding spirit of the United States, a republic, the American Dream is available for any person who is free to think for themselves.  Do not believe in un-American leftist propaganda.  Child, every Chinese American is grateful for the contributions of African American leaders in the Civil Rights movement and for their contributions to the freedoms available to all today.  We do not forget how they fought and struggled for freedom but we must not forget what Chinese Americans have also contributed and struggled against as well.  Perhaps there is not enough history taught in schools about the prejudice and discrimination that Chinese Americans faced a hundred years ago and still face today.

The Chinese Exclusion Act of 1882, was the only law ever passed to exclude a race from entering and working in the United States.  Subsequent acts of discrimination barring immigrant Chinese workers from attaining naturalized citizenship and/or bringing their families over brought rise to an age of activism in the Chinese American community in San Francisco.  It was through the actions of Wong Kim Ark, who sued the Federal government, that enabled generations after, of all races and nationalities, to enjoy the right to be born as an American citizen. (Wong Kim Ark v. United States,1898)  The repeal of the Chinese Exclusion Acts was also through the efforts of Chinese American activists.

Your assumption that “we owe everything we have today to them” reveals not only your ignorance of history, but also your own racism — worse than racism, is self-denying racism.

The Reverend Jesse Jackson frequently urges African American teenagers to study hard, to work hard, to believe in themselves, and to learn good virtues. But many African Americans have not learned from these admonishments.  Proverb 12:24 in the Bible, says “Diligent hands will rule. But laziness ends in forced labor.”  There are some who have, instead, chosen to embrace the ideology of the victim.

Child, it appears you have not been taught to think independently. You are not able to discern cause from effect.

The success of many Chinese Americans came from the self-governing democratic system in the United States.  Historically, we have been unfairly treated, but we struggled against the intolerance, discrimination and hatred and put it behind us.  We salute to those hard-working pioneers as we turn our faces toward a brighter tomorrow.  We answer past injustices by working hard, by building and helping to improve society.  We choose forgiveness and gratitude as we move forward to a more tolerant society.  Understand that the constant barrage of “anti-Racism” is a form of racism in itself. I encourage you to seek and attain knowledge from a wide range of perspectives.  See links to alternate voices: John McWhorter, Glenn Loury, Coleman Hughes.  Read the works of these strong, educated Black Americans.  Do not fall victim to those who seek to divide America.  Believe in respect and humanity for all people. 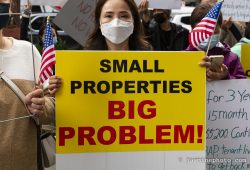